“Clouds come floating into my life, no longer to carry rain or usher storm, but to add color to my sunset sky.” – Rabindranath Tagore 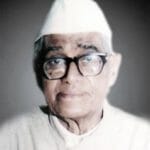 Sitaram Gangadhar Shende is the founder President of Satyaniketan which was established in the year 1950. He was popularly known as Bapusaheb Shende. Bapusaheb was born on June 24, 1911, in Rahimatpur village of Satara district, Maharashtra. There was a beautiful Temple of ‘Shri Ram’ in Rahimatpur, so in this belief, his father named him Sitaram. His family was religious and famous for having a deep Vedic knowledge. His father was the Royal Priest of Gwalior State, had a deep study of Hindu religion. Subsequently, Bapusaheb was trained for all kinds of religious rituals. Sitting on a horse, Bapusaheb would wander in different villages to perform the religious rituals.

At the age 13, his father died and Bapusaheb lost his support. He was very confident and brilliant. After passing 7th standard in 1927, he got admission at New English School, Satara and matriculated in the year 1930. As a student, Bapusaheb was very brilliant, popular and faithful leader of students. Bapusaheb had his mastery on Bhagwad Geeta.

The Salt March, which took place in 1930 in India, was an act of civil disobedience led by Mahatma Gandhi to protest British rule in India. During the march, thousands of Indians followed Mahatma Gandhi and nearly 60,000 people were arrested including Gandhiji. There was a patriotic wave across the country and Bapusaheb had taken an oath of not to become the slave of the British government. In 1931 Bapusaheb enrolled in Fergusson college of Pune. Wearing a ‘khadi’, he was a rather different looking student, always remained engaged in reading volumes of Lokmanya Tilak’s biography. He could not afford the residence of Fergusson’s hostel. Next year he left Fergusson College and enrolled in Rajaram College, Kolhapur. In the year 1935, Bapusaheb passed B.A. in Second Class with Economics and Politics as main subjects. For his next education, Bapusaheb again went to Pune, took admission for M.A., simultaneously started the study of L.L.B. He came in contact with Dr. Dhananjay Gadgil who selected him as a proper candidate to study ‘Agricultural Labour in Deccan’ in Gokhale Institute. For this purpose, he visited different places in the country, saw the poverty of people, observed different social problems of people. During this period Bapusaheb developed his close contact with common people. With the permission of Dr. Dhananjay Gadgil, he went to Rahimatpur and tried to establish a National School there. He was emphasizing the value and importance of freedom to the people. He was absolutely fascinated by the thoughts and views of Mahatma Gandhi. At the age of 25, Bapusaheb was married in 1936. His wife supported him a lot, as both of them were participating in different revolutionary movements. He kept himself away from politics.

1936-42 was the challenging and tough period Bapusaheb’s life. Every Indian wanted freedom, everyone was thinking of the improvement of the rural economy. At that time, leaders like Vaikunthbhai Mehta and Annasaheb Sahashrabuddhe were fighting for better rural economic structure. Bapusaheb came in contact with them. To make the rural economy strong, they decided to run different employment schemes and projects in various parts of the country. Wool-industry was the main income source of some tribes in Maharashtra. Bapusaheb was sent to Kashmir to study different projects related with wool production. He was very much fascinated by the rural strength and the curiosity of villagers towards the rural industry. Inspiringly Bapusaheb started ‘yarn-spinning and yarn-production center’ at Rahimatpur.

In 1941 Bapusabeb became the member of All India Congress Committee. Along with his hundreds of followers, he participated in historical ‘Quit India’ rally at Gowalia Tank, Mumbai on 8 August 1942. That was a Civil Disobedience Movement to gain Independence from British rule. As soon as the resolution was passed, all the national leaders were arrested. Due to the absence of any leader outside, the masses turned violent and burnt government offices. Thousands of Congress members were arrested. Many State and District level leaders went underground to spread the message of ‘Quit India Movement’ in villages. Balusaheb escaped himself in disguise. He didn’t go to Rahimatpur but wandered in villages to villages spreading the message of Mahatma Gandhi. Meanwhile, Bapusaheb arranged a secret rally in Rahimatpur, came of a stage in disguise and delivered an aggressive speech against the British government. He was arrested in that rally and sent to Yervada jail. He spent two years in Yervada and Nashik jail. In 1945 he returned from jail and again continued his revolutionary work with Vaikunthbhai Mehta and Annasaheb Sahashrabuddhe.

‘All India Village Industries Association’ is one of the set-ups established by Mahatma Gandhi to promote the Rural Urbanization in the country. ‘Charkha Sangh’ and ‘Gramodyog Sangh’ were its two active branches. Balasaheb Kher became the President and Bapusaheb was appointed as the Secretary of ‘Gramodyog Sangh’ of Maharashtra. Later Bapusaheb was selected as the member of ‘All India Village Industries Committee’, as the representative of Maharashtra. This committee later founded ‘Maharashtra State Khadi Gramodyog Mandal’. To promote ‘Khadi Gramodyog’ in Maharashtra many public and voluntary organizations were formed. Under the Presidency of Shri. Dhotre ‘Maharashtra Seva Sangh’ was formed, later Shankarrao Dev became the President of ‘Maharashtra Seva Sangh’. Bapusaheb was the active member of this organization.

In the year 1949, the Government adopted a scheme known as Sarvodaya Scheme the aim of which is The executive authority in the formulation and implementation of such a scheme in each district is a non-official worker known as a ‘Sanchalak’ of the Sarvodaya Centre who is assisted and advised by non-official committee of members known as the Sarvodaya Committee. Every year, a plan of development of the area is formulated by the Sanchalak which is considered by the State Sarvodaya Committee before it is finally sanctioned by Government.

To promote the same idea effectively and systematically in the rural and remote region, Maharashtra government adopted Sarvodaya Scheme to bring all-round social, educational and economic development of society. Since its inception, two years had been passed but there was no Sarvodaya Centre in Ahmednagar district of Maharashtra because Ahmednagar district was known as the stronghold of Communists who were against Sarvodaya ideology. Sanagmner-Akole was known as the capital of Communists in Ahmednagar district and absolutely influenced by Communist ideology. A historical meeting of Sarvodaya leaders arranged at Akole in 1950. Shankarrao Dev and many national and state-level leaders were presented to that meeting. Unfortunately, no local volunteer came forward to promote the Sarvodaya Scheme in Akole Taluka. Finally, Shankarrao Dev declared the name of Bapusaheb Shende to promote Sarvodaya Scheme in Akole Taluka. Many people were of the opinion that the Centre should start in Akole, but Bapusaheb decided to start the Centre in Rajur village, 20 km. away from Akole. Meanwhile, Bapusaheb came in contact with R.V. Patankar who was the editor of ‘Lokshakti’. At the insistence of Shankarrao Dev and Bapusaheb Shende, R.V. Patankar left the job of ‘Lokshakti’ and took the responsibility of Rajur’s Sarvodaya Centre. At that time, Rajur was very small and remote village, surrounded by 40 tribal villages. The tribal people of the region were leading a very critical and challenging life. There were neither educational facilities nor employment opportunities for the tribal people. After the successful implementation of Sarvodaya Scheme, the lifestyle of tribal people started to change positively, as Sarvodaya focused farming, health, employment, industrial and educational requirements of the people.

Salute to the great work of Bapusaheb Shende…!!!