“We are hidden in ourselves, like a truth hidden in isolated facts. When we know that this One in us is One in all, then our truth is revealed.”
– Rabindranath Tagore 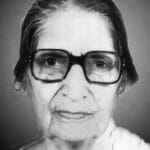 Sitaram Gangadhar Shende is the founder President of Satyaniketan which was established in the year 1950. He was popularly known as Bapusaheb Shende. Bapusaheb was born on June 24, 1911, in Rahimatpur village of Satara district, Maharashtra. There was a beautiful Temple of ‘Shri Ram’ in Rahimatpur, so in this belief, his father named him Sitaram. His family was religious and famous for having a deep Vedic knowledge. His father was the Royal Priest of Gwalior State, had a deep study of Hindu religion. Subsequently, Bapusaheb was trained for all kinds of religious rituals. Sitting on a horse, Bapusaheb would wander in different villages to perform the religious rituals.

Salute to the great work of Savitribai Madan…!!!